Bored apes on yachts still lead the NFT tables by trading volume but Sipherian Inu is racing up the charts and pushing down the CrypToadz. 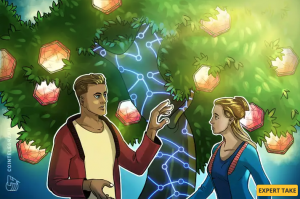 If that all sounds a little… well, trivial, bigger things are brewing. James Cooper, a law professor, and Peter Grazul, a lawyer, have suggested ways in which NFTs can boost self-governance. Think of it as politics on the blockchain.

That’s not the only way politics is reaching the blockchain, though. Creatd, a digital content company, is releasing an NFT of Donald Trump. The 240 ETH token contains three pictures of the former president, including one in which he signs the bare chest of an “Ivanka look-a-like.”

Creators will soon find minting those NFTs easier, cheaper, and greener. Photoshop will soon get a “prepare as NFT” option. Rarible is passing its minting fees from creators to buyers. And a new Ethereum-to-Cardano bridge is giving NFT creators more eco-friendly choices. It will even be easier to pay your taxes on those NFT trades. ZenLedger, a cryptocurrency accounting software maker, is launching NFT tax support.

But Tencent and Ant appear to be drifting away from the NFT world. The companies have switched from using the term “NFT” to “digital collectibles.” The move follows a blockchain crackdown in Beijing.

Binance, though, is stepping up. The company’s NFT section is launching an Initial Game Offering to support NFT gaming. The drops will provide a foundation for a gaming metaverse connecting leading blockchain games and NFT assets. They’ll need to move fast. Dencentraland is already preparing to hold its first festival.

What’s made that possible, of course, is the metaverse’s passionate community. Drucritt, Community Manager for Dogs Unchained, has been talking about what community-building entails.

Anyone looking to help build those communities might want to talk to GameStop. The company is looking to hire a team of NFT and Web3 specialists. It’s probably easier than riding bulls, which is what professional bull riders do. They’re working with SmartMedia Technologies to release Professional Bull Riders branded NFTs. Collectors can even win a Chad Berger bucking bull. An NFT, not an actual bovine.

Or you could go for zombies. Filmmaker and comic book writer George C. Romero is releasing an exclusive film NFT collectible. Working with comics and scifi publisher Heavy Metal Entertainment, “The Rise” is based on The Rise comic book series, a prologue to Romero’s father’s zombie classic Night of the Living Dead.

In other major releases, SNKRWars is coming on October 31.  While WAX is getting Hot Wheels, Power Rangers, and a return of GPK.

You can find even more releases on WAX, NiftyDrops, Rarity, and NFT Insider, and as we approach Halloween, don’t forget to claim your free Nefty Block Pumpkin Pack. Some 39 promising NFT collections are collaborating! Join the Discord Halloween channel to prepare your wallet.

LISTEN TO THE SHOW:

Do your own due diligence and research. Neither Joel Comm nor Zach Comm are FINANCIAL ADVISORS.

We are sharing our journey with you as we learn more about this crazy little thing called cryptocurrency. We make NO RECOMMENDATIONS. Don’t take anything we say as gospel. Do not come to our homes with pitchforks because you lost money by listening to us.

We only share with you what we are learning and what we are investing it. We will never “pump or dump” any cryptocurrencies. Take what we say with a grain of salt. You must research this stuff on your own! Just know that we will always strive for RADICAL TRANSPARENCY with any show associations.